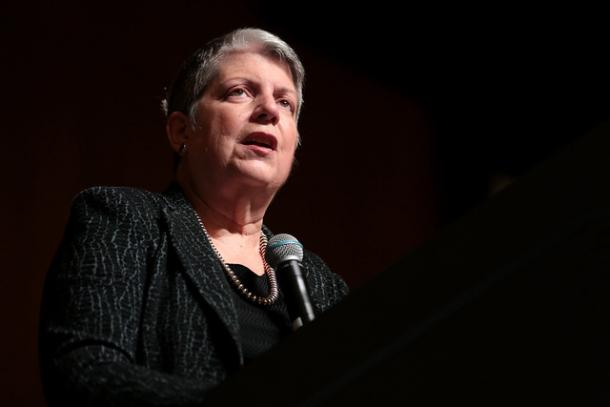 Janet Napolitano Stepping Down as University of California President

University of California President Janet Napolitano has announced her resignation six years after she was appointed to the position. She made her announcement Wednesday at a University Board of Regents meeting, CalMatters reports. She’ll step down August of next year.

Although Napolitano has suffered from health problems in the past (she was battling breast cancer as recently as 2017), her reason for leaving is not health-related.

“My time at UC has been deeply gratifying and rewarding. I have been honored and inspired every day to serve this institution alongside incredibly dedicated, passionate people,” she said. “The decision was tough — and this moment, bittersweet — but the time is right.”

Napolitano became the first woman to head the UC system in 2013. Her tenure saw increased enrollment and stable tuition rates, more services for undocumented students, and a landmark lawsuit against the Trump administration for rescinding DACA. Napolitano also managed to weather a scathing state audit that found $175 million in funds hidden by her office. Napolitano’s staff was accused of interfering with the review itself and she was forced to apologize. Gov. Brown withheld $50 million from the university system while it got its act together.

In 2004, Napolitano was mentioned as a possible running mate for Democratic presidential candidate John Kerry. That, plus Napolitano’s 2020 departure date, led to some speculation on Twitter Wednesday. So far, it appears to have been nothing more.